IFMSA Celebrates the Adoption of the Sustainable Development Goals

Home / IFMSA Celebrates the Adoption of the Sustainable Development Goals 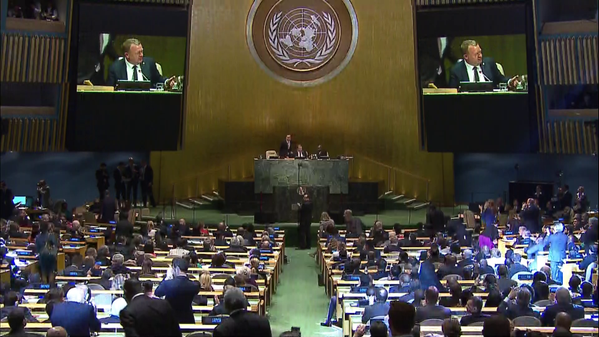 New York City, United States – The International Federation of Medical Students Associations (IFMSA) welcomes the historic adoption of the United Nations Sustainable Development Goals (SDGs), an ambitious agenda for global development. IFMSA strongly believes that their overarching objectives will contribute to improve the lives of millions of individuals and of future generations by tackling the worlds greatest challenges: eradication of hunger and extreme poverty, reduction of inequalities, and urgent action to combat climate change.

IFMSA, representing a network of 1.3 million medical students worldwide, has worked in the field of sustainable development for many years, and has been vocal in the highest decision-making process, such as Rio+20 and the SDGs Open Working Group. IFMSA has successfully strived to ensure that health was included as a transcendent pillar of sustainable development. As stated by Dr Margaret Chan, the director general of the World Health Organization in February 2015, Thanks to IFMSA, health is one of the key areas of the sustainable development goals. Moreover, IFMSA has already been working in several other cross-sectorial areas of the SDGs that are particularly of importance for the youth, namely quality education, gender equity, and justice and peace.

As such, IFMSA particularly celebrates the adoption of Goal 3, which will seek to ensure healthy lives and promote wellbeing for all at all ages. We appreciate the focus given on achieving universal health coverage and universal access to sexual and reproductive healthcare services; on reducing premature mortality from noncommunicable diseases – the worlds largest killer; and on reducing deaths and illnesses from unhealthy environments and air, water, soil pollution. That being said, IFMSA underscores that health shall not be siloed to Goal 3, but fully incorporates into the other goals. A holistic approach must be adopted by all stakeholders, governments, civil society, private and public sectors. We must foster global partnerships to successfully achieve targets that has been set.

In IFMSA, we recognize that a healthy population is necessary to pursue sustainable development, and that a healthy environment is a prerequisite for good health. Ensuring that future health professionals are valuable contributors to the healthy and sustainable development of the society is one of our core values. – Agostinho Sousa, IFMSA President

Beyond the approval of the Sustainable Development Goals, we must now seize the momentum to implement those common objectives. IFMSA understands the challenge ahead and the ambitious – yet feasible with commitment – timeline of the SDGs targets. We also pledge to increase and strengthen our organizational efforts in building capacity of our members, to raise awareness about the 17 different SDGs and the means to implement those goals at the national and local levels within our 129 national member organisations.

About IFMSA
The International Federation of Medical Students Associations (IFMSA) envisions a world in which all medical students unite for global health and are equipped with the knowledge, skills and values to take on health leadership roles locally and globally. Founded in 1951, IFMSA today represents a network of 1.3 million medical students through its 129 national member organizations. For more: www.ifmsa.org.